The latest addition to the Star Wars movie universe could be considered a sequel to the prequels…or maybe a prequel to the sequels. It’s confusing if you think about it too much. That’s why we shouldn’t think about it and just enjoy it for what it is. You know what else is confusing? The spelling for “Rogue” and “Rouge.” Such a minor error could make a drastically different meaning…kind of like “Angels” and “Angles.” Hmm…

It’s hard to spoil the movie because you know how it ends, but I’ll remain respectful. I want everyone to enjoy the full experience of the story. This iteration is must darker than its predecessors (chronologically…in the real world, as opposed to chronologically in the Star Wars world. You know what I mean). The film told a war story set in the Star Wars universe, so that much was necessary. Overall, it was well done and compelling despite knowing the result of the story.

For the most part, the filmmakers were respectful of the previously made content, including the prequels. They paid homage subtly, made mostly tasteful cameos and mentions.

My main complaint would be the score—specifically one track. It sounded like some low budget movie wanting to rip off the original Star Wars theme, but composed it slightly differently so as not to infringe on copyrights. Yikes. The timing only exacerbated it, taking me out of the movie at one point. Minor and nitpicky, for the most part.

Continuing the nitpick, I could have lived without some of those grandiose speeches as I felt they didn’t add too much. On to the good stuff.

They portrayed the desperation of the rebels well and left a sense of just how difficult life was for the non-force wielding, plot armored bastards that got all the glory. 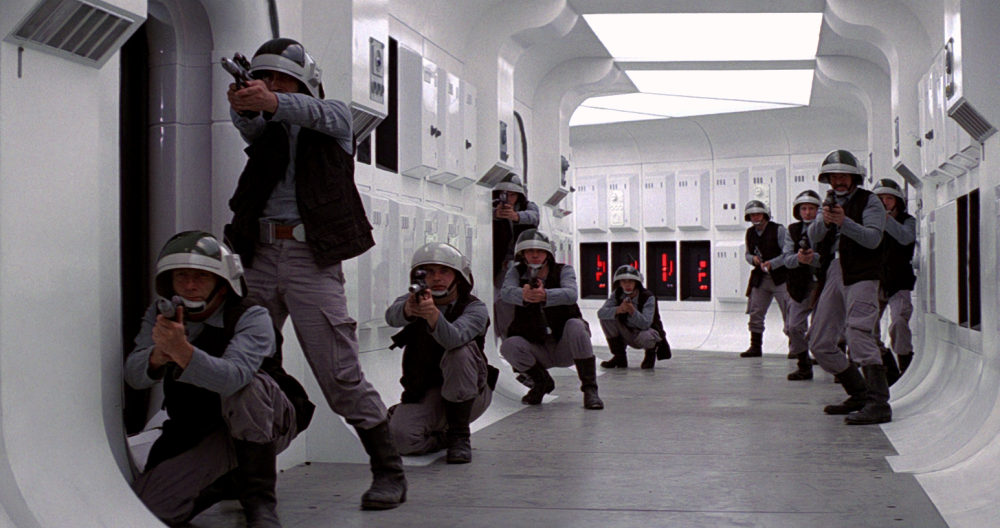 A corridor full of people that are dead, but just don’t know it yet.

A lot of scenes were beautifully shot. I might be biased because they went how I would’ve done it…if I had two decades of directing experience and a $200 million budget.

Reshoots and changes left a lot of trailer scenes out of the movie. Regrettable since some of those scenes looked brilliant. Their final product remains strong though. I would rate it higher than Episode VII: The Force Awakens.

Unfortunately, I knew a fair share of people that didn’t realize that this movie took place between Episode III and Episode IV. Given that fact, I can see why they would be baffled by what they saw as a fourth Death Star. Haha…man. I would’ve been quite negative about that if I had been in their position.