Before you read this post, swing by USCTrojans.com and check out the announcement.

How do you go thinking you can improve something that’s been working for 100 years? Too many questions and not enough answers. Granted, not every single one of those things were 100 years old, but all of it carried a legacy.

They paid actual money for these “updates”. Consultants, man-hours, and when it’s all done, replacing courts, uniforms, equipment, banners, and even paper. Yes, letterhead can incur cost a pretty penny—or in this case, an ugly one. Whatever the case, it’s a cost too high to make a few things more pale. That happen naturally out in the sun, man.

Maybe I’m alone here and if I am, I’ll quietly endure these changes in the corner—but I’m willing to bet I’m not. Yet these designs got passed around more hands than a joint amongst junkies and somehow still got the green light.

Speaking of green, what’s up with this font? After a simple color change, some of the letters look like the pipes from Mario Bros.

I can almost hear the sound effects

It may be difficult for stylistic things to be objectively worse, but this rebranding sure wants to prove that statement wrong.

In case you’re still unsure what I’m griping about, it’s:

Maybe I’m overreacting a little. I can live with them removing the “Trojans” over the interlocking SC. It just doesn’t really fit in a lot of stuff. They’ve been inconsistent with its use anyway. Just take a look at almost anything in the renovated Heritage Hall or the neck of the jerseys. The continuing loss of color is probably what bugs me the most.

The changes seemed so unnecessary and wasteful…kind of like this other thing. 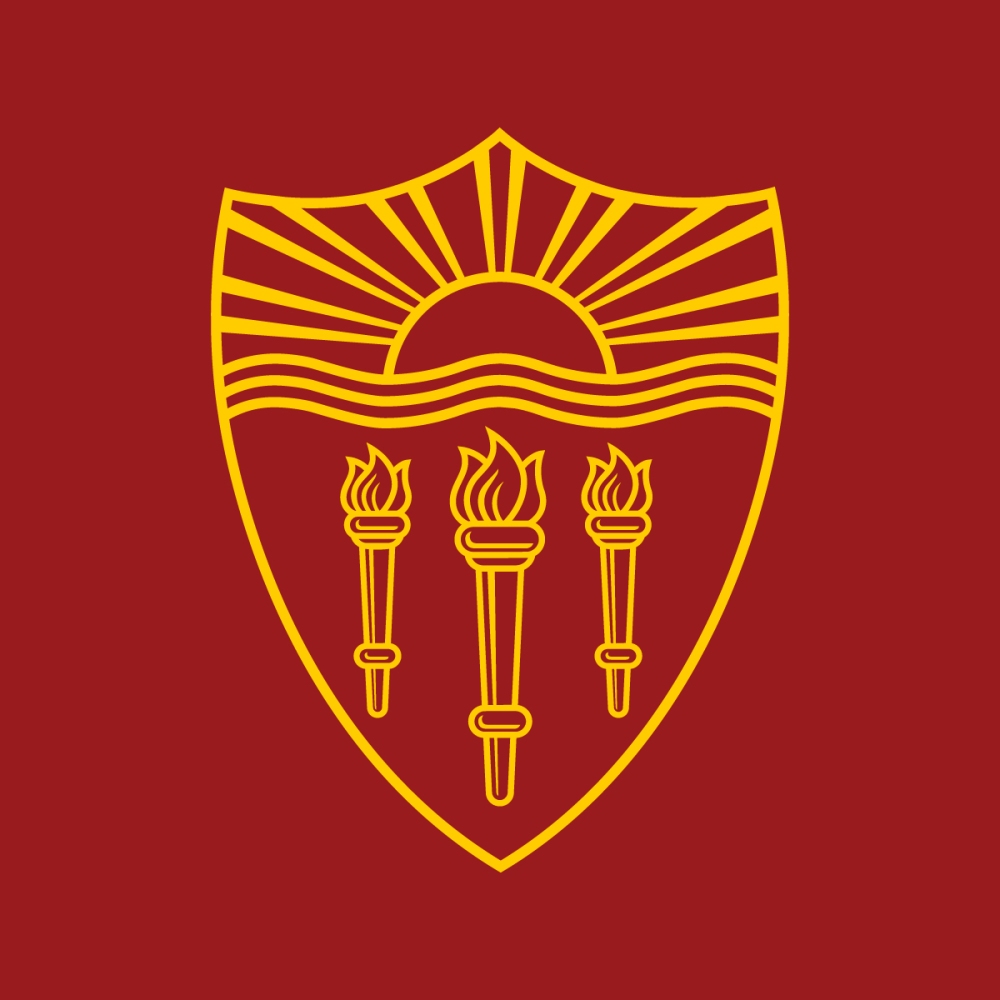 Alright, I think I beat that one to death. It’s just the latest chapter of unneeded “modernization.” Something more substantial would be like the Coliseum losing almost 16,000 seats. I wish I could say I was some old soul that just recoils at any change, but I’ve slept on this one for a night or two—and about 5 years for that shield thing.

Maybe Lynn Swann can save us from ourselves.

New coaches, new quarterback, and new athletic director make for an interesting spring. Too bad the annual “spring game” was anything but. There were a lot of 9 on 7 drills, situational plays, and just plain practice stuff during another hot day in Southern California’s eternal summer.

Eventually, they got to the good stuff with 11 on 11 and even live tackling. The only ones exempt to the hits were the four quarterbacks participating. It may not have been awe-inspiring, but we saw a few good things. For one, the vertical passing game is back and totally in style. Both Browne and Darnold completed some long passes.

Early on in the 11-on-11, Browne connected with Darreus for a large gain, but it was still iffy. Take a watch below:

Browne underthrew the deep pass, big time, but still completed it to Darreus Rogers. The three DBs present not only allowed the catch, they allowed Rogers to take the remaining 20-ish yards into the endzone. The ball traveled approximately 50 yards in the air—42 from the line of scrimmage. The added run made brought the play to 64 yards and a touchdown. Could’ve been worse, I guess. In the end, both Darnold and Browne’s stats look impressive:

The City of Angles advanced eye test alghorithm has deduced the following ranking of the four:

Receivers dropping a copious amount of passes was still a thing. Luckily, they redeemed themselves a bit later on in the “game.”

The offensive line did decently in pass blocking, but allowed a few tackles for loss in the run game. Despite that, the running backs were the most consistent position group throughout.

Going back to the DBs, they clearly need some more work. They took some bad angles in the open field, and mistimed jumps. Those guys had some good pass breakups, though. Give them credit for that.

Towards the end of the day, Clay Helton gave blind longsnapper, Jake Olsen, a chance to snap the ball. He got a lot of cheers and applause for his two snaps.

That's 3! @jakethesnakeo gets a standing ovation at the @lacoliseum after a perfect FG snap. #FightOn https://t.co/HK8QHEa63M

Once again, we find ourselves waiting to find out who they name as the quarterback starter. City of Angles has a great hot take. For today’s troll lineup, Max Browne should be the starting quarterback followed by Matt Fink in two years. Why? It’s quite simple. They must continue the legacy of the House of M. The QB starters that played a majority share of the season dating back to 1998 are as follows:

The House of M had some interruptions, but could’ve completed a dream of five in a row, as seen below. Instead, Cody CommBro Breaker Kessler came in and denied Max Wittek’s rightful place in the pantheon of USC quarterbacks with an M first name.

Look at the beautiful alliteration that was destroyed. Thanks Kessler.

Disclaimer: Clicking the random links strewn throughout the post should increase your understanding and viewing enjoyment.

Hardcore Henry was a movie funded on Indiegogo and bought by STX Entertainment, a fledgling studio, for $10 million. The over-the-top action sci-fi was filmed mostly on a GoPro camera. While the whole first person thing might be a gimmick, they certainly don’t survive over it. It was shot and set in Russia, starring a South African actor (Sharlto Copley) and off an extremely modest budget, just to make sure you knew this isn’t your average film.

As you may have guessed, the plot lacks substance. Basically, Henry seeks to kill the main antagonist, Akan. The film is more akin to The Raid: Redemption than Spotlight. Much like many of the video games that the movie pays homage to, the main character doesn’t even speak. Most of the exposition comes humorously through Jimmy.

The jokes in the movie probably save it from being a one-trick pony—kinda like my blog. The gags pervade every aspect of the film, down to how they display some of the subtitles. Stuff like that is where the true value of the movie lies.

Like you would expect, Hardcore Henry puts the gore on full blast. It could be awkward watch with your parents. If you’re a parent, don’t bring your kids. Send them to watch casual Henry instead. Or royal Henry on BBC, or a documentary of racist Henry building some Model Ts.

On top of the violence warning there needs to be a nausea warning. Watching things in first person tends to make a bountiful number of people sick. To avoid a bountiful amount of vomit coating the theater floors, you should all consider this in advance. I found it completely bearable, but the two others in my party had some trouble. The filmmakers went to great lengths to minimize it as much as possible.

The movie really made me appreciate my nervous system and the immense amount of sensory input that it gives my brain. I had no idea what was going on around Henry for some moments. It really goes to show how much our senses do to give us a bearing of the world.

And because I must, I will close with one final pun: Henry must’ve been wearing one hardcore henley to not get ruined after everything he went through.

Batman v Superman is the second DC Extended Universe (DCEU) film, following behind Man of Steel. It’s less boring than the non-action scenes of Man of Steel and was better than the Rotten Tomatoes rating would suggest. The movie sits somewhere between that and decent on the spectrum.

In case you needed a visual representation. Dug out from the City of Angles archive. Not.

Batman v Superman had potential. Those expectations quickly changed to concern upon the first dream sequence. After pulling off an artful opening, they follow it up with a cringey scene…minutes into the movie. I felt that those dream sequences were one of the more horribly executed parts of the movie. The editing also gave it a run for its money.

Scenes, both necessary and unnecessary, kept getting tossed at you in a dizzying fashion (climax and epilogue are the biggest offenders). That really screwed with the pacing and was straight up jarring in certain moments. I understand that they had a lot to cram into the two and a half hours while also setting it up for the Justice League films. That shouldn’t be an excuse to create a hodgepodge of scenes that are confused about its own identity. However, these issues don’t stop it from being an entertaining film.

Luckily, they managed to fit in some visually satisfying action scenes. The film carries immense post-production value. The visual effects and sound editing keep it a theater-worthy experience. Post can’t save a weak script though…

The concept of Batman fighting Superman is great. There are so many reasons for them to fight. Somehow, they managed to make it feel unsatisfying. How do they spend a majority of the movie building up to it, yet make their reasons for fighting feel so contrived? Their little spat was akin to how a RomCom would play out. A simple explanation that takes a sentence or two would have cleared everything up. It’s called communication, people.But I guess not everyone can be a CommBro; it is a daunting and harrowing calling. Certainly not one taken by a reclusive rich man that saw his parents die or some alien that’s confused about his role on Earth.

While I try to avoid comparing the DCEU to the MCU (Marvel Cinematic Universe) and Fox Marvel properties, the comparisons are inevitable. However, I posit that my comparisons will be meaningless and without substance. Enjoy.

A Hydra agent (Callan Mulvey) finds new work in Metropolis after being beat up in Captain America: Winter Soldier. After you get beatdown by a super solider, why would you then move to a city where you could get beat down by a flying, superpowered alien? Curious.

The heir to the Yashida Corporation (Tao Okamoto) spends her time as an assistant to Lex Luthor at LexCorp. This is probably because she spent her entire family’s fortune to smooth over Silver Samurai incident in The Wolverine.

No, they’re not actually connected. I was found it funny that they took minor characters from Fox Marvel and Disney Marvel and brought them into the DCEU. When you’re an actor, work is work.