In another year, this would’ve been a typical Rose Bowl matchup of Pac-12 and Big Ten champs. It also could’ve been a reasonable drive over to Glendale, Arizona for the Fiesta Bowl. Instead we got the Jerry Jones Special Edition because Ohio State went to the Fiesta twice in the past two seasons.

Still, it should have been an epic showdown of historic proportions, but turnovers and stout defenses pitched a completely scoreless second half of futility. The coaching on the offensive side failed the team.

Don’t get me wrong. Winning the conference is no small achievement. Getting 11 wins in a season isn’t something to scoff at. Only 14 of the 130 FBS teams managed to win 11 or more games. Statistically, that’s less than the percentage of people that get accepted into Duke every year.

However, I present you a different angle. Buying a house is no small achievement either. Certainly one should be commended for having the discipline and commitment to save up for a nice home. But imagine Helton and his staff went out with $10 million dollars but bought a 2000 sq. ft. condo in LA. That’s not as impressive anymore. It’s actually kind of disappointing.

So Clay didn’t make it to the playoff his second full year as a head coach. Fine, even Pete Carroll dropped a game or two most seasons. No BCS national championship/CFB Playoff isn’t the end of the world. He made it to the Cotton Bowl against an equally talented opponent…then proceeded to showcase an unprepared offense after nearly a month of preparation.

Does this mean Clay Helton should be fired? That’s a big time no from me. He definitely needs to reevaluate the staff and make necessary changes, most of which are on offense. The Trojans were basically living in the red zone and failed to score all but one time. Their only score came from a fumble at the OSU 15 yard line.

The story of the game can be seen in a single stat line. OSU points off of turnovers: 21. The defense deserves credit for holding Ohio State’s top 10 offense to a crawl. They allowed only 3 points in the first half when turnovers weren’t involved and an unconditional zero points in the second half.

Had a game manager approach at QB been taken, the score could’ve been 7-3. Wipe off all of the turnovers and it’s still 0-3 with plenty of opportunities to win. If they turned the ball over on one less drive and managed to scored a touchdown instead, that’s a 14-17 game. Basically, if they had any more ball security and this would’ve been a much closer game.

You can blame Sam Darnold if you want. He’s been doing the same thing all season: consistently turning the ball over. Of the 14 games, he’s turned over the ball in 12 games and multiple times in 8 games. His 9 fumbles lost and 13 interceptions make for 22 total turnovers. To put that in perspective, as an individual player, he accounts for as many or more turnovers than 101 FBS teams. He also missed some easier passes that led to the offense stalling out. He played his part in the dormant offense, but coaching did him no favors.

The first thing I want to bring attention to is the play calling. As painful as it can be, one of their options is to play Seahawks ball. Run first and only throw when necessary. Punt to pin the opponent deep in their own territory, allowing the defense lots of room to work. It’s not the flashiest way to win (and they have their own offensive coordinator and OL problems themselves), but they win many games against tough opponents. The offense focuses on playing safe and avoiding turnovers and the defense keeps them in the game.

If you want to throw and your QB keeps getting sacked, how about trying some screen passes? Move the pocket, try something. I only saw a few roll out passes and only remember one screen pass.

Misuse of the clock even when there was a reasonable chance to win the game. They didn’t run plays towards the sideline so that continued to drain the clock. They played slow despite being no huddle. One of the worst offenses was draining the last 30 seconds of the third quarter for no reason. They could have run a few more plays before the fourth.

USC has played 6 times against opponents that were ranked at the time. They went 3-3, with 2 lost in embarrassing fashion. Only one was in the top 10.

Urban Meyer, quite likely a future hall of fame coach, may not have had his best game or season, but went 4-1, including four top 10 opponents. His team’s loss was to by two possessions to a playoff team.

If Ohio State and USC traded head coaches, keeping everything else the same, do you think USC would lose?

One thing’s for sure: I’m not going back to Arlington, TX anytime soon.

GOOD: Defense. I’ve said my piece about them.

BAD: Offense. Four total turnovers, didn’t score on 93% of drives, 8 sacks allowed, and 1 of 4 in the red zone. Despite throwing for 356 yards, Darnold didn’t even have 60% completion percentage and couldn’t make some pivotal plays. In fact, he was barely at 50% completion going into the fourth quarter. Tight end blocking was weak. When have you seen an offense with 413 yards, 23 first downs and only 7 points?

BAD: Special Teams. Outside of the muffed punt recovery, the special teams didn’t do well. Punts were short, a short field goal bounced off the uprights, and kickoff returns were bad.

BAD: The pointless scuffle at the end.

GOOD?: Hopefully the nature of this loss compounded with the same struggles throughout the season gets Clay to make some personnel moves. With the addition of an assistant coaching spot and the departure of Tyson, there are two slots to fill even without any terminations. We could potentially be seeing a very different team next year.

I can’t leave you all with mostly bad things, so I’ll find some of the silver linings for you.

This is only the 14th 11-win season in all of USC football history and the first since 2008. Thirty years from now, people who didn’t watch these games will look at this on a list of hundreds of seasons and consider it to be a fairly successful season. You can look forward to telling your grandchildren about how the team squandered their talent by slightly underachieving.

We can also end the debate about whether or not Tyson was the one holding the offense back with play calling. He already left for Tennessee so the culprit(s) remain on staff. I mean, I guess he could have been part of the problem, but he’s certainly not the sole issue.

While the Big Ten had a historic bowl run, the perfection was ended by Michigan. That’s a good thing, not because it prevented a undefeated conference record but because everyone gets bloomin’ onions instead of…coconut shrimp. 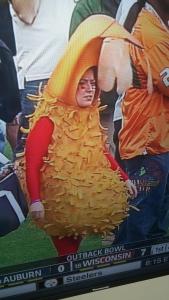 Depressing Stat of the Week #1 Part 2: In an anomaly, Ronald Jones has more rush yards (64) than the USC team (57). His net rush yards are offset by all lost rush yards from sacks and tackles for loss.

Mixed Feelings Stat of the Season #1: USC has the #5 red zone defense. They also have the #121 red zone offense. That 116 rank difference is the largest of any team.

Mixed Feelings Stat of the Season #2: As if you needed anymore statistical evidence of the defense carrying the offense, the defense is #22 in the nation with 25 takeaways. USC is rank #121 in turnovers with 27 lost.