The USC season began with 52 points being scored on them in a soul-crushing loss. It ended with the Trojans scoring 52 points in one of the most exciting victories in half a decade. The difference four months can make.

The 103rd Rose Bowl was the stage for USC’s 25th Rose Bowl win on its 34th appearance. This is perhaps the biggest win since their last Rose Bowl back in 2009. I actually can’t think of a single win in the past decade that has been more meaningful, exciting, and impactful as this Rose Bowl.

Even Pete Carroll chimed in:

The grey clouds hovering over the Arroyo Seco could’ve been taken as a dark omen—like it could rain at any moment. However, just like it almost rained, USC almost lost. 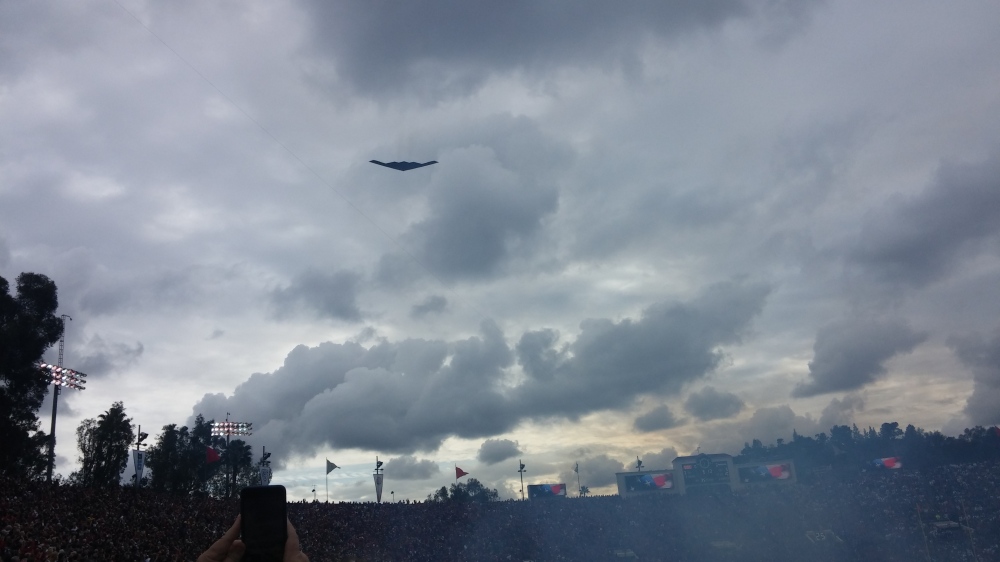 Dark clouds and a black bird! Not to be confused with the SR-71 Blackbird.

The former 1-3 team was still down 14 points with about 8 minutes to go, as if a microcosm of the entire season. Against all odds they accomplished something that was considered to be an old memory or distant future. They ended Penn State’s nine game winning streak while extending their own to nine in the long, grueling, and highest scoring Rose Bowl in history in come-from-behind fashion.

Much like their winning streaks, both teams had their moments and scoring streaks. They traded scores for a while in the interim.

The Trojans started well with the Nittany Lions at their own 3-yard line before throwing an interception. And then another. It’s unfortunate that USC was unable to capitalize and get points off of turnovers. With an extremely short field on each of their first four possessions, they could’ve easily gone up 28-0. Instead they had 13-0 after missing one out of three field goals and coming away with only a single touchdown.

I had told a friend that USC needed to pad their lead to 30-0 because the Nittany Lions would score and would make a comeback. It happened earlier and harder than I expected.

Penn State scored on their next seven possessions, including a 28-0 run. The biggest morale destroyer was their 21 points off three offensive plays in 33 seconds of possession. USC was only down 15 points (two possessions), but it felt like so much more.

Because USC doesn’t do comeback wins anymore…until they did

Against Penn State in Rose Bowl, USC posted its 1st win in last 10 seasons when trailing by 14+ points in 4th quarter (was 0-15)

At a time when we only dared to hope for overtime so that they had a fighting chance, the Trojans managed to pull out a victory.

The first Penn State play called a run on the first play after Deontay Burnett’s last touchdown catch in triple coverage. It seemed to signal that James Franklin wanted to play for an overtime period, but thenTrace McSorley throws a floating deep pass after the cornerback slipped. Luckily the deep safety got into position to intercept it—but dropped it. Leon McQuay probably thought he lost the opportunity and the play would haunt him forever.

McQuay got something much better than that. His interception and ensuing 32-yard return set up the game-winning field goal. As the kick sailed through the uprights, I held my celebration, unsure of what I was seeing. I only started after the official signal from the referees. Even then, I kept checking the clock to make sure the game as actually over. Absolute disbelief.

The rough season start and the Penn State comeback weren’t enough to set the stage for the wild narrative. The Trojans had to get shafted in the throughout the game to truly add enough adversity™ to make the payoff of a comeback win worthwhile.

Let’s start with that “late hit.” Both Chris Hawkins and Uchenna Nwosu arrive just as McSorley is sliding. Both of them don’t even have time to make half a step before colliding with the Penn State QB. Yet a flag is thrown for the hit. Doesn’t that give you flashbacks of when that teacher or parent in your life that said “If you’re early, you’re on time; if you’re on time, you’re late.”

Apparently, the ACC took that old phrase to a whole new level. If McSorley wants to avoid getting hit like that, slide before the dudes are in your face.

Ball clearly just left QB’s hand. The Center is about half a yard vertically away from the receiver that catches the eventual TD pass.

Pinning it on the ground is supposed to be enough?

These ACC officials further worsens my view of them after their crapshow in the previous game against Notre Dame. Could Pac-12 referees have a new challenger?

Then down to the interviews of former players, pretty much all of them were Penn State except for Mark Sanchez. Why not have a chat with Ronnie Lott, Marcus Allen, and/or Rodney Peete? Allen, Lott, and Peete all played in the Rose Bowl (multiple actually). They were all roaming around the sidelines.

Every time they did, it pumped up the Penn State crowd and got them cheering. SC did not get such things.

Next up is Western Michigan for the Home/Season Opener on September 2, 2017.

I was uneasy about Helton’s decision to punt with less than four minutes and down by a touchdown. He sure showed me. He knew if he went for it and scored it would only get you overtime. He wanted to win in regulation, so he punted and got 10 points instead. The Helton mindgame strikes again. Now he’s graduated from stealing opponent timeouts (like against Arizona and UCLA) to stealing time itself.

Ridiculous Stat of the Week:

As you can see from the game information at the top, the 2017 Rose Bowl lasted 4 hours and 12 minutes. To underscore how ridiculous that is, the 2011 triple overtime defeat at the hands of Stanford lasted 4 hours and 1 minute. How does a game that ended in regulation take longer than a triple OT game? Thanks ACC officials. Here’s a fake conspiracy theory of why:

Rose Bowl tickets are expensive (one of the most expensive bowl games, if not the most). The ACC officials must be economic-minded folks and wanted to give you more game for your money.

To those watching at home? You geven got it for free, why complain?

Ridiculous Stat of the Week #2: USC won its 25th Rose Bowl game. The rest of the Pac-12 combined has won 27. Shame on USC. They need to go win three more.

Ridiculous Stat of the Week #3: There were two Marcus Allen’s at the Rose Bowl. Marcus Allen (USC 1978-81) was watching Marcus Allen (PSU 2014-present) from the sideline. The two are not related…unless you trace their lineage back like hundreds of generations to a point that you can say most people are related.

Last thing—I make a lot of jokes about Dragon Ball Z, but this one almost makes itself

Sorry I couldn’t cover everything folks, but there was just too much to talk about in this game and I’ve already written the longest post of the season.