Somehow, Helton took his team on the road and managed to score 41 points on one of the better Pac-12 defenses. That’s the most points anyone has scored on Cal in a single game all season and one point shy of the most points scored on them since 2018. Before playing USC, they held teams to an average of less than 21 points per game. That would’ve ranked them around #26 in the nation in scoring defense, had they not played USC. Helton is probably feeling pretty good about himself after this win, but I doubt it convinced anyone that he should be retained at the end of the season.

At the beginning of the game, Cal was able to run with at the USC front seven with success and scored first. Typically, the talent in skill positions can be somewhat comparable between schools like Cal and USC. The true gulf usually lies in the line talent, which would show in the running game on either end. The continued run success of USC’s opponents suggests a gulf in coaching ability.

After figuring out the exploitable match-ups between the Cal secondary and USC receivers, the Trojans went vertical as often as they could. More than one third of Slovis’ attempts were completed for 10 or more yards and five completions were in the 30+ yard range.

Many of the touchdowns throws came from very anti-climatic slips by Cal defenders. It resulted in plays like this one:

His celebration had about as much enthusiasm as me when I found out that I won $2 from a $1 scratcher. I guess he’s seen better touchdowns though.

Speaking of which, four different receivers had touchdowns, which is pretty cool.

BAD: Ejection of defensive lineman, Christian Rector, due to targeting. His tackle for

BAD: The umpire was standing in the way of a pass route, requiring him to duck for the ball to get to Pittman. The obstacle proved to be enough for cause him to drop it.

GOOD: Slovis being able to scramble and come to a complete stop before passing to Drake London.

BAD: Like the story for many of USC’s opponents this season, the starting QB went out of the game, allowing USC to beat them down. The game was still a tough 10-7 until their offense stalled out with backup QB Devon Modster in for the starter Chase Garbers.

GOOD/BAD: The tip interception to Isaiah Pola-Mao was great…until he fumbled it on the return.

GOOD: It was great for the back ups to get some playing time in for once.

Only one more game until the end of the regular season. Then endless speculation regarding coaching moves will be fueled until a new hire is formally announced by Athletic Director Mike Bohn. USC fans will be sitting together like this: 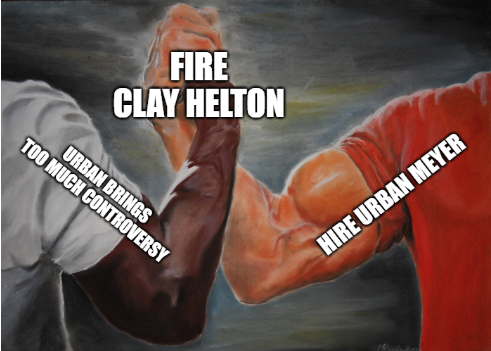 I think most people can agree that we are beyond the point of saying Helton can recover. (Ridiculous Stat of the Week #1:) There are only three teams with winning records in the conference at the moment. USC has played all of them and only beat Utah. Despite such a soft schedule, they could only muster up a 7-4 record.

It will take a Utah loss to either Arizona this week or Colorado next week and a USC win against UCLA for USC to make it to the conference championship game. Either way, we hope the UCLA game is his last game.

Ridiculous Stat of the Week #2: Averaging 2.1 yards per rush. USC almost averaged more scoring drives per quarter than that. Cal managed to average 4.7 yards per run.