Despite what was probably JT Daniels’ best game all season, the Trojans could not overcome a pair of fumbles and recurrent errors. In a paradoxical manner, they fought harder than anyone expected out of them yet repeated some excruciating trends like zero points in the third quarter.

The season is officially over for USC with no bowl game and a losing season. Freshmen on the roster born after November 25, 2000 literally hadn’t had a USC losing season in their lifetime. For some others, like Daniels, they weren’t old enough to remember a thing about it. That’s how big of a deal this is for the program. Clay Helton should be promoted to fan ASAP. 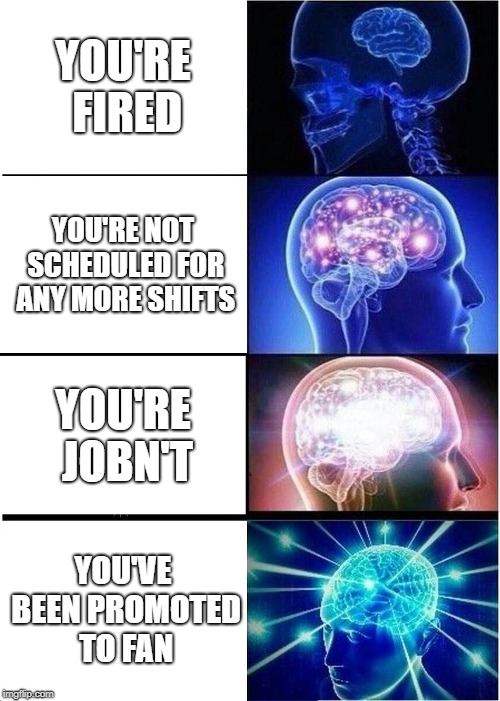 I’ve modified this expanding brain meme for the occasion.

It’s baffling why Swann intends to bring Helton back for another go when he has shown little to no improvement through 3.5 seasons as head coach.

USC AD Lynn Swann explains his decision in a letter to the #TrojanFamily. #FightOn pic.twitter.com/wjr1VMv28w

From his first game as interim against Notre Dame in 2015 to this final ND game in 2018, Helton had about two dominant road game performances outside of Los Angeles (one against each of the Arizona schools). He has also gotten blown out on the road by Notre Dame, Oregon, Stanford, Alabama, Utah, Ohio State, and Texas. Don’t forget about ugly, grinding wins or close losses against teams he should have handled easily. The same applies to some atrocious home games. I can’t imagine this going over well with the fan base.

Home games haven’t broken 60,000 attendees at all this season. What will it look like in 2019 with Helton retained? Should we be prepared for the first back-to-back losing seasons since 1961?

Ridiculous Stat of the Week #1: JT Daniels maintained a career high 72% completion percentage despite throwing the ball more than 50 times.

Ridiculous Stat of the Week #2: The Trojans averaged 4 points per third quarter this season.

Ridiculous Stat of the Week #3: USC is 120th in the nation in turnover margin, which is also tied for last in the Pac-12.

Ridiculous Stat of the Week #4: USC is 122nd in the nation in penalties per game and are 123rd in penalty yards per game.

Ridiculous Stat of the Week #6: The number of people saying “I’ve been a fan since 19__, but no longer.” Is this straw that broke Traveler’s back in a torrent of frustrating decisions made by the USC Athletic department? The nail in the Kiffin?

Misleading Stat of the Week #1: A USC QB has a passing efficiency of 165.5 and tied with the nation’s best for least number of interceptions thrown.

We’re talking about Jack Sears…who only has 28 career attempts.

Also, in case you’re wondering about the title: https://www.merriam-webster.com/dictionary/clanger. I needed to introduce British English to fully describe the depth of this era’s failures.

See you all next season if you’re still around. I should be back to writing full length posts. Thanks for your continued support!