As the regular season comes to a close, USC finishes 3-1 in November, 1-1 against major rivals, but 5-0 against Pac-12 South teams. USC knocked UCLA out of the polls and climbed back in at #24. They also rise to 8-4 while dropping UCLA to 8-4. Although their records are the same, their seasons will be remembered so much differently. USC advances to the Pac-12 Championship Game next Saturday against Stanford. The winner will get an automatic Rose Bowl bid to play against either Michigan State, Ohio State, or Iowa, depending on how things shake out in the Big Ten. It will be the first time USC plays in the Pac-12 CG, but not the first time they won the Pac-12 South.

Back in 2011, after handing the Bruins the third largest margin of defeat in the series, USC had a two conference game lead on second place UCLA. However, Larry Scott didn’t want postseason ineligible USC to screw up his inaguaral Pac-12 Championship Game, so he elected to have 6-6 (5-4 in conference play) UCLA represent the Pac-12 South. When asked whether USC was the Pac-12 South champ, a Pac-12 spokesman stated, “USC can not own that title. USC can say that it finished first, but not champion. Our division champions participate in the championship game, so UCLA will be considered champion, or co-champions should it finish tied with ASU.” So the barely bowl eligible Bruins faced off against the 10-2 (8-1) Ducks—two teams that USC beat in back-to-back weeks leading up the to the Pac-12 title game.

Before the Bruins even sniffed the field, they applied for a waiver to remain bowl eligible if they lost against Oregon (which they did). UCLA went on to lose to Illinois in the Kraft Fight Hunger Bowl, finishing 6-8—a record earning them the distinction of losingest bowl team. Those were interesting times.

Speaking of 2011, the 50-0 win against UCLA was the last time USC has won against UCLA prior to the beatdown they suffered on Saturday. The 50-point margin of victory still hasn’t been matched by UCLA during their 3-game win streak. After adding the margins from the 38-28, 35-14, and 38-20 wins, the total comes out to 49. So close. It only took three tries.

The Trojans ended the Bruins’ three game series streak coming out of sanctions and on its fourth head coach in four games against UCLA. What’s your excuse?

The pregame already started favorably, as Slash performed for the national anthem. The Trojans and Bruins fought back and forth with a couple of lead changes. The half closed with the Trojans on top, 20-14. That was when the Spirit of Troy broke out the Star Wars halftime performance, complete with a personalized intro from Mark Hamill (Luke Skywalker, if you didn’t know). He a dropped a “May the Force be with you and fight on!” at the very end.

The Force was certainly with the officials as nothing went over their heads. They announced every single time there was a jersey switch on kickoffs. Jim L. Mora subjected us to all that referee face time. Heck, the refs might have gotten more time of possession than UCLA did.

One thing is for certain: USC dominated the possession statistic, controlling the ball for 40:01. That’s literally just enough for me to say they had the ball more than twice as long as UCLA did at 19:59. The fourth quarter was probably the most insane. The Trojans possessed it for 13:52 out of the possible 15:00.

Outside of Justin Davis running for 100 yards in the fourth quarter alone, no single player had particularly impressive stats. Cody Kessler had less than 200 yards passing, JuJu had less than 100 yards receiving, and Ronald Jones wasn’t even close to breaking 100 yards rushing. However, they still managed to win by a three score margin. Time of possession, a +3 turnover margin, and being able to score on defense and special teams made that possible. Every phase of the game did their part with no major breakdowns. Even the penalty department was reasonable.

The offense was not doing very much early on, so the defense stepped up and made some great stops. USC had changed their defensive scheme significantly from what they were doing the rest of the season. They went mostly man-to-man with a single high safety in either Chris Hawkins or Marvell Tell. There were also personnel differences like Adoree’ at safety and Porter Gustin starting at rush end. Justin Wilcox brought extra pressure often from the safety spot to get true freshman Josh Rosen off balance. The crowd noise every single third down certainly did him no favors.

A flustered quarterback tends to look for their favorite targets. For Rosen, they are Jordan Payton and Thomas Duarte. The duo account for almost 50% of UCLA’s receiving yards and nearly 70% of their passing touchdowns. Su’a Cravens was manned up on Duarte and Iman Marshall on Payton. Marshall made them pay for the targets with two pass break ups and two interceptions—Rosen had not thrown any interceptions since losing to Stanford on October 15. Cravens had 3 pass break ups, Adoree’ had 2, and the true freshment Tell and Isaiah Langley each had 1. In total, they were just shy of double digit pass break ups. Basically, the defensive backs knocked about one out of every four of Rosen’s passes out of the air.

The defense also managed to sack Rosen three times. He was so out of sorts, he even tried to throw to his own offensive lineman. This wasn’t the first time that a UCLA quarterback threw a pass to an ineligible receiver while desperately trying to avoid a sack when their team was losing in the fourth quarter. Back in 2010, the Bruins were losing by 21 with 1 minute to go and Richard Brehaut wildly tossed one up after being hit by Nick Perry. The ball fell into the hands of an offensive guard who then fumbled it into the hands of an offensive tackle. The comical play was taken back by penalty.

All of the defense’s stops set up the special teams and offense to score. The Trojans scored 13 points off of turnovers and even had Adoree’ return a punt for a touchdown. UCLA’s special teams had allowed a mere 6 punt return yards all season. Adoree’ outdid it by seven times, returning it 42-yards for a touchdown and retaking the lead late in the second quarter.

Halfway through the third quarter, Rosen and Paul Perkins led the Bruins down the field to retake the lead. That score at 8:38 in the third quarter would be the last time UCLA scored. A minute and 20 seconds later, Rasheem Green returned the aforementioned forced fumble for a touchdown, restoring order to the scoreboard.

After the offense woke back up, they drove down the field and allowed Darreus to outjump a UCLA DB and stretch out for a satisfying touchdown. After that, it was time for the Trojans to control the clock. On their last two drives, USC ran 20 plays: 17 runs, 2 kneel downs, and 1 pass. That lone pass was a touchdown to tight end Taylor McNamara.

In the waning moments, the Coliseum echoed loudly with chants of “We are SC.” The volume and energy level was something that had been missed for almost two entire seasons.

USC had finally evicted the ungrateful tenant. With that, they resumed ownership of Los Angeles. 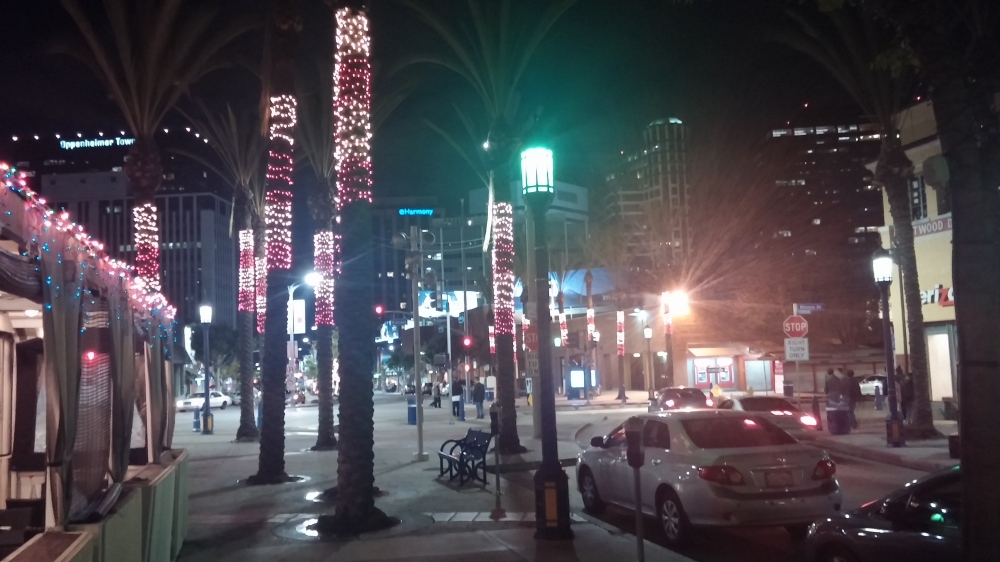 They even lit the tree in Westwood for the Trojans.

The work is not yet done. The Crosstown Cup score is tied at 25-25 with the football victory. Also, when the Trojan Knights nab the Victory Bell back, they still gotta give that thing a fresh coat of paint. Lastly, the football team still has to take down Stanford in their extended season. I sure hope they didn’t just get the extra game to have an extra loss. Unlike bowl games, they don’t get multi-week prepartion. It will be a quick turnaround.

Misleading Stats of the Week: Clay Helton is undefeated as head coach against Stanford and in the postseason (because he hasn’t faced Stanford as a head coach and has only played in one post season game as head coach).

USC is undefeated against UCLA in games played before November—all five of them, going 4-0-1.

Origins of the Eight Clap

Warning: The following should not be taken as historically sound or accurate.

Abstract: In order to understand the etymology of the Eight Clap, one must look further back into history. Across the city, the University of Southern California had adopted the Trojan moniker in 1912. They adopted a curious hand signal that many Bruins mistake for saying they are second place. However, this is a misnomer. The Trojan “Fight On” hand sign is a true counterpart to the Eight Clap.

Back in ancient Troy, Trojans would cut off the index and middle fingers of conquered opponents. This was a preventative measure to stop conquered groups from wielding swords, spears or bows in retaliation. As a result, Trojans would taunt their opponents by holding those very fingers up, as if to say, “Haa, I still have my fingers.” It was a sign of being part of the ruling class.The modern day USC Trojans revived that ancient taunt as they conquered the football fields of their opponents. The Bruins were one of these conquered opponents, which, to this day, have never taken a lead in the series.

As most marginalized groups would, they began to embrace their identity. Since conquered groups lost two fingers, they role-played as if they did as well. In order to account for the ‘lost’ fingers, they invented a clap involving only eight fingers: three from one hand and five from the other. The Bruins would clap this combination together repeatedly in futility. As the clap evolved, they tried to obscure its origins while attempting to keep a semblance of tradition. As a result, the modern day Bruin Eight Clap involves clapping eight times instead of using eight fingers. 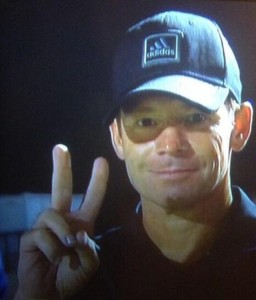